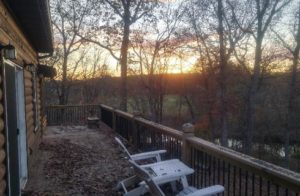 This is one beautiful autumn sunset!

Where did this cabin come from? It actually started with a much different cabin…a long time ago. Travel with me down memory lane and half way across Missouri to Marquand, Missouri, located in Madison County along the Castor River.
Imagine a group of men, shirt sleeves rolled up, thick cigarette smoke in the air, BS’ing around a poker table. The gamblers included the local MD, Doc Adams, my Uncle Bill, and several farmers and ranchers. One hand led to another and before long, the stakes were higher than usual. Doc Adams, not wanting to be bluffed out of a big pot, stayed in the game and put up the deed to his little red cabin in the hills, on a logging road down County Road 320.
He should have folded, because he lost that hand to my Uncle Bill and the cabin entered the Turlin family. Years later, Bill sold it to my Dad, who passed it on to me.
Once the family relocated to Kansas City, traveling over six hours to visit the cabin became impractical. After a number of years, we sold it and began the search for a new place. It had to be within two and a half hours of our driveway; on a clear, cold Ozark stream; and fairly isolated. After nearly three years of searching the internet, calling numbers on “For Sale” signs, and meeting with realtors, I came upon acreage in Camden County along the Little Niangua River. We purchased twenty five acres with over one hundred feet of river frontage in 2013. We started construction one year later. Now, we have a beautiful little house…that looks like a cabin. With an emphasis on quiet rejuvenation in a cozy, natural setting, we offer rest and relaxation, as well as guided discovery hikes. Hence, the name: Little Niangua Nature Cabin.